This episode is a deep dive (and I mean deep into the “exciting” world of lawyers and accountants) into the foundation of starting a business. I cover how to set up your business from a legal and tax perspective. As part of this episode you’ll hear straight from two experts I interview. Preston Koerner with Koerner Legal Advisors will go over the legal piece and Jason Grant with Trackin Assets will talk about different tax considerations.

What to Expect From Episode 2

In the intro Craig and I talk about partnerships and trying to determine if a partnership is right for your situation. You can download the free partnership questionnaire we refer to.

In the interview with Preston, we cover the differences between an LLC and a Corporation and the pros and cons of each.

In the segment with Jason we talk about double taxation (yuck), payroll taxes and different tax structures, including one of the most common, the Subchapter S Corporation, often referred to as an S-Corp. Hint, hint: there is a reason so many small businesses, including trucking companies, elect S-Corp status. The nice thing about an LLC is that you can be taxed as an S-Corp. Any tax professional should be able to help you make that tax election, if it is the right one for you.

In the summary at the end, Craig and I discuss an example that shows how you save paying some payroll taxes through an S-Corp. I’m a visual learner so we created visuals so you can see it, too. The numbers I am using here are a little different than the numbers I mention in the podcast, but the concept is the same. These are realistic numbers that I have seen from clients I’ve worked with. 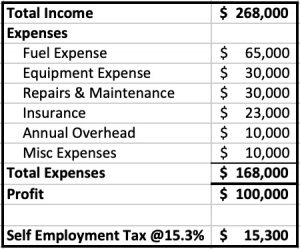 With a sole proprietor, the IRS does not distinguish between the money Chris earns as a driver and as the business owner. After all operating expenses are paid, what is left over is all considered income/profit and Chris has to pay a 15.3% self-employment tax on all of it. In this example, that works out to be $15,300. Ouch.

Now let’s look at an example using the same numbers with some small tweaks the IRS allows with an S-Corp. 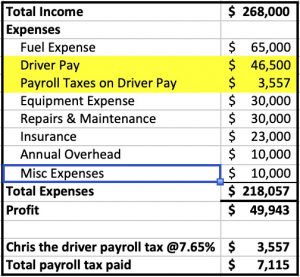 How Being an S-Corp Saves You Money

An S-Corp owner can also be an employee of the company and be paid as an employee. (FYI, how much you pay yourself as an employee is a very important discussion between you and your tax professional. Hint, you can’t work for free.)

You can see in the example above, there is an additional expense for the company, you paying yourself as an employee/driver, see the yellow highlighted rows. You will also notice because there is an “employee” the company has to pay half of the payroll/FICA tax (7.65%) as shown on the second highlighted line. You as the employee have to pay the same amount, see the second-to-last row. The total payroll tax paid is $7,115, half as much as a sole proprietor would have to pay.

This is one of the biggest reasons most self-employed small business owners use an S-Corp. That is a tax savings of $7,115 because the profit portion of the S-Corp is not taxed payroll/FICA taxes.

I think we should all pay our share of taxes, but not a penny more than we legally have to.
Chris

Listen to the Full Episode

What about a c corporate entity? Benefits? Tax savings strategies for c Corp? How To work out the double taxation of a C Corp.?

Hi Frank, great questions. I will try to give you some general answers, but for you and anyone else out there, you really need to talk with a tax professional who is familiar with your situation to know what is right for you. C-corporations are usually used by someone who is going to aggressively grow their business and not necessarily take a lot of money in the form of dividends. The way a lot of businesses “work around” the double taxation is by reinvesting the profits. Most profit that is reinvested is not taxed in a c-corp. A c-corp is… Read more »

[…] own business. Our podcast Haulin Assets covers step-by-step many of the starting steps, including how to set up your business, get your operating authority, and buying your truck and […]

What Is the Best Business Structure for a Trucking Company? | Motor Carrier HQ

[…] cover all this information in episode 2 of Haulin Assets, so make sure to check that out if you want to learn […]

So I guess the problem that I have with your numbers is 46k for a driver? If I wanted to get paid 46k I would work for a mega carrier. Most people go to be a owner op so they can get paid 75k or better can you please explain why you think 46k is appropriate?

Great question. In this particular episode, we talk about saving on payroll taxes. The strategy involves paying part of your wage as driver pay. The $46k is just the driver pay part. You want to keep that as low as possible while meeting the IRS requirement of being reasonable. You do that because that is the part you pay payroll taxes on. As an owner operator, part of your pay is the net income of the company, so to know how much you make as an owner operator using this strategy, you would add the driver pay and the net… Read more »

Hey Derrick, thanks for the question. We don’t operate as a sole proprietor. I would never recommend a sole proprietor in the trucking industry, there is just too much risk. My situation is different than most people because I own many different businesses, so technically, Haulin Assets is structured as a partnership. My share of the partnership is owned by my own holding company, which is an S-corp. If Haulin Assets was the only company I owned, I would have structured it as an S-corp. Instead my S-corp, that I am the sole owner of, owns my share of Haulin… Read more »