Eating Out vs Store-Bought Food, a Trucker’s Dilemma | Episode 22

I thought it would be fun to see how much of a cost difference it would to eat out for a week versus eating store-bought food for a week. I was shocked at the difference. Listen to the episode for the full details, but some of the highlights are below. Leave a comment to let me know what you do to save money on the road.

What to Expect From Episode 22

In this episode Craig and I talk about my little experiment to determine the cost difference between eating at truck stops and restaurants for a week compared to eating food I bought at Walmart and was prepared at home or on the road. The difference was shocking.

A Week of Eating Out On the Road

This image shows where I ate and how much each place cost me for the week I was eating out. 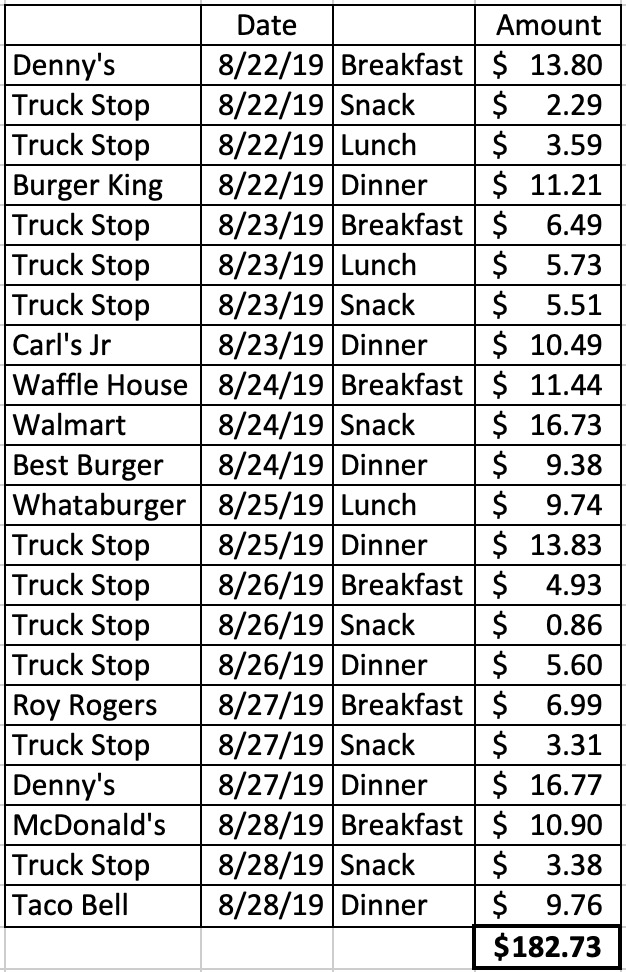 The $182.73 total for the week averages out to $26.10 per pay or $8.70 per meal. Considering I did not always eat three meals a day and I got a snack about every day, I think it is a pretty accurate representation of what most people would spend eating out on the road.

For the second week, I went to Walmart and bought groceries for my breakfast, lunch, and snacks. For dinner, my wife saved and froze leftovers that I took with me. I did not include the leftovers as part of my cost because that was food that I would have eaten at home and in all reality probably would have gone to waste because I am the biggest eater of leftovers in my house.

Here is where I got really nerdy. I took a little food scale with me and actually weighed the M&Ms that I bought in bulk so I was only eating the same amount as a king-sized package you buy at a truck stop.

At truck stops I paid $2.00-2.50 per king sized, the bulk M&Ms only cost me $0.80 per king-sized equivalent. I also weighed the peanut butter, Miracle Whip, relish, and honey I used and only included the cost of what I actually used instead of the entire bottle. Here is how the costs broke down.

The $31.85 averages out to $4.55 per day or $1.52 per meal. I was trying to cut a little bit of the weight I had added on the last couple of months, so I was being conservative about the quantity of food I was eating, but I was not being too crazy. My point is this is probably on the low side of what most people would spend preparing their own food. Here is a pic of my week’s worth of food. 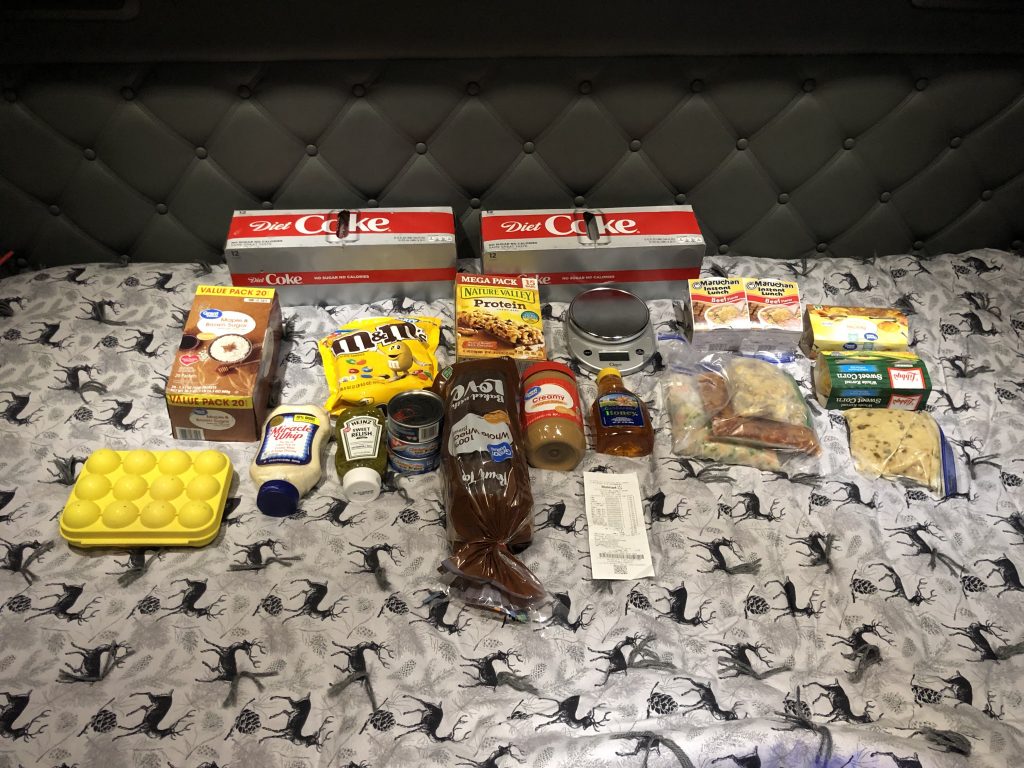 My wife and I stick to a budget because we want to be deliberate with our money and spend it on the things that really matter to us. Using a budget has been a huge blessing for us in our lives, because we have cut spending in meaningless areas like eating out all the time (we still eat out, just not as much), so we have money to do the things we really enjoy like going on vacations and having fun experiences with our kids.

I challenge everyone out there to be deliberate with your money and spend it on the important things.

Listen to the Full Episode

PL find something else to drink other than those 😉 cokes: stay close to water as much as you can.